From Flight to Ballpark
With Kristie Ackert
THURSDAY, OCTOBER 8, 2015 -- Kristie Ackert hoped to be home in New York this weekend, but a few bad pitches and a power failure meant she had to hop a plane and work from Los Angeles instead.

When the National League Eastern Division champs stumbled down the stretch last week, they lost the chance to open the baseball playoffs at Citi Field in Queens. That meant Ackert had to get to the West Coast for Friday night's game against the Los Angeles Dodgers, the Western Division champs.

"I'm sitting in the middle of a pile of clothes, half winter [and] half summer," Ackert told me on Monday afternoon between filing stories for the print and Web editions of the nation's fourth-largest daily paper.

On Tuesday and Wednesday, she covered Mets workouts at Citi Field, handled interviews, cranked out more Web and print stories and kept playoff-obsessed Mets fans updated via Twitter. Then she was scheduled to hop on an American Airlines flight from New York's LaGuardia, change planes, fly to John Wayne Orange County Airport in Santa Ana, rent a car from National and drive to a Marriott hotel near Dodger Stadium in Los Angeles. 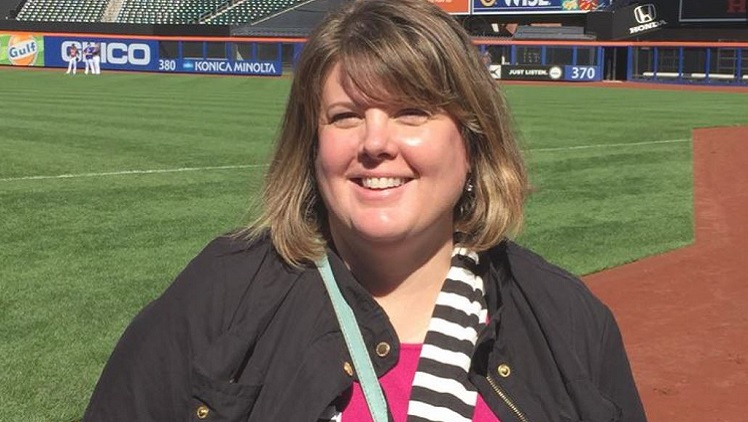 Why not fly nonstop into nearby LAX from Newark or Kennedy airports, I wondered.

"LaGuardia is a lot more convenient from my apartment" in Harlem, she explained. "Besides, I like Orange County better. Less crazy than LAX."

When you're on the road nonstop from the start of spring training in mid-February until baseball's winter meetings just before Christmas, small concessions such as flying into a preferred airport and booking with your favored airline, hotel chain or car-rental firm is the closest you get to victory as a beat reporter.

"You have to learn to pace yourself. This job is a grind," Ackert admitted. "It's airport, ballpark, hotel, airport, week after week for months. It's a bad sign when you look forward to the American Airlines snack pack because you didn't have time for dinner."

Now in her third season on the Mets beat after starting her career nearly 30 years ago as a high school intern on the sports desk of her hometown paper in Oneida, New York, Ackert said she's several hard lessons from the endless travel.

"I used to pack way too many shoes," she said. "I don't need all of the products I used to need. And like every New Yorker, all my outfits now are based around black."

Another tip of the sportswriter's trade? "Pick a hotel near the ballpark so you can walk there and won't need a car. But also pick a comfortable hotel. If you work at the ballpark at night, you sleep a lot during the day. The hotel has to be quiet."

Like all road warriors, Ackert has a pair of go-to pieces of luggage (22-inch case with a swiveling handle and a bag that folds down for easy storage in her apartment) and a set rotation of travel tech (a Macbook Air laptop, a Samsung Galaxy tablet and an iPhone.)

She's also well aware of her elite perks with her preferred suppliers. As an American AAdvantage Gold flyer, she's been upgraded six times on about 25 roadtrips.

Her Marriott Platinum Elite standing "gets me pretty good treatment generally." She chooses lodgings based on a combination of cost and location, although she's begun to favor stays at hotels in the chain's more stylish Renaissance chain and at the Autograph Collection, Marriott's "soft brand" of independent lodgings.

For ground transportation, she prefers a small SUV ("I feel a little safer") as one of the perks of her National Car Rental Executive Elite status. "I rented for 50 days just during spring training," she said.

Like all business travelers, Ackert also accepts her share of small indignities. "On getaway day [at the end of] a three-city roadtrip, I have to bring my bags to the ballpark," she explained. "It's not fun to have the stadium guards go through your stuff."

Of course, baggage inspection is nothing compared to the early days of women on the baseball beat. It is less than 40 years since women were even allowed in locker rooms. Sportswriting isn't an exclusive boy's club anymore, but Ackert remains the only woman on the Mets beat and said she's one of just five newspaper women regularly covering major-league teams.

She's also only about 20 years removed from her first unpleasant exposure to baseball beat writing. In the mid-1990s, while working at California's Modesto Bee, she was assigned to cover the minor-league team affiliated with the Oakland Athletics.

"The manager wouldn't talk to me," she said. "He called my boss and told him to get me off the beat. He said women didn't know anything about baseball."

Her boss, the newspaper and the influential Baseball Writers Association backed her up, however, and she remained. "But it was no fun."

Thankfully, she is quick to say, gender isn't much of an issue on the baseball beat these days. "You can't be unaware of the fact that you are the different one, but these guys are used to me. When you have the baseball writer's card, they leave you alone."

Still, it's a long way from where she thought her career path would lead. "I loved sports, basketball and tennis, but I wasn't raised around baseball. My parents weren't fans." Growing up, in fact, Ackert thought she'd cover politics. "I always wanted to be a news writer. I just sort of drifted into sports."

Before being attached to the Mets, Ackert was a general-assignment sports reporter at the New York Daily News. She covered high school and college teams, basketball, football and hockey. The Mets gig came as a surprise and she relied on Andy Martino, her predecessor, for tips about how to manage the February-to-December grind of life on the road.

"He was the one who schooled me on sticking with one airline because you'll get better treatment," she said. "He told me what hotels were good, what cities required a car. You know, the important stuff."

A 2020 UPDATE
The Mets beat the Dodgers and then the Chicago Cubs to win the National League pennant, but lost the 2015 World Series in five games to the Kansas City Royals, the American League champions. Ackert remained on the Mets beat for three more seasons. In 2019, she switched to the New York Yankees beat. When the 2020 baseball season was interrupted in the middle of spring training, Ackert remained back in Florida. "I am still trying to cover baseball," she told me in mid-May.

This column originally appeared at BizJournals.com.

Column and JoeSentMe.com Copyright © 2015-2020 by Joe Brancatelli. All rights reserved.